3 BONES is a bare-bones fantasy role-playing game for a handful of players with a handful of dice. All you need are 3 six-sided dice and some paper for a character sheet: a business card that is blank on one side should be enough! It's perfect for running a one-shot adventure on short notice. Character generation is quick and easy so you can start playing right away. If you want to play "a charming rogue who casts illusions" or "a dwarvish archer who hunts monsters" or a "wizened sage who brews potions", then just write that down with a name and you're over halfway there!

The game includes a minimalist system that is easy to hack and make rulings for to keep the action moving. Also included are several examples of different ways to use the basic rules to represent magic, feats of heroic prowess and derring do, magic items, monsters, and more. (Special thanks to Luka Rejec of WTF Studio for the Creative Commons "Ten-eyed Wurgler"!) You could use it to run quick low-prep adventures in your favorite setting or use the included list of generic medieval fantasy equipment and example adversaries to just wing it and make up an improvisational game session. There is also a one-page adventure--"The Lair of the Wild Hunt" (with maps by Dyson Logos)--to help get you started.

If you want to use the system for long term campaigns, the experience and character development system called "Exploits" turns your "experience points" into a record of your adventures (like a "highlight reel" of your PC's adventuring career). PCs can directly draw on their previous experiences to help them in their future endeavors. Even if you get killed, your legendary Exploits can still inspire your allies to greater successes after you are gone.

Roll the bones and have some fun! Or pick the bones clean to port tasty bits of "3 BONES"--such as Exploits, Burdens, and recovery scenes--to season your other favorite games as useful and simple house rules.

The plain text version is free and released under a CC-BY license, so you can use it as a basis to hack your own games as long as you include "built on 3 BONES by Brian Bình" in the credits.

Support this game at or above a special price point to receive something exclusive.

Too many bones and not enough cash? Call CASH-4-BONE!

Not enough cash or bones? Take a free copy of 3 BONES!

Too much cash and not enough bones? Buy a copy of 3 BONES and add to the community copies!

I love the system, but I fail to understand how defenses are supposed to work. Armor and shields make reference to defense rolls, but those rolls aren't defined. When being attacked, do you need to roll for each point of damage that your armor or defense action would block? That would mean that instead of the Defend action blocking 1 damage as stated it would allow you to attempt to block 1 damage, or maybe even to attempt to block damage until you block 1 damage.

And less a gripe than a jovial poke in the ribs: exploits are brilliant, but I feel the perfect opportunity to refer to them quite literally as "experiences" was missed.

The defense roll for armor is the same as any other roll: 3d6, take the middle die, add a relevant bonus, and succeed on a 5 or more (or another number if the GM decides it should be higher or lower). The defend action is an action that blocks damage by parrying, dodging, etc.

Armor works like the defend action, but it doesn't count as one of your actions. You can still add a bonus if you have one that is relevant to using armor. A "wizened sage who brews potions" would just roll the bones and hope for the best, but a "brave knight who slays dragons" would add the +2 bonus for being a knight: he knows how to roll with the blow and tuck his arms in (to avoid exposing the less armored spots like the inner elbow and armpit) to get the best use out of his armor.

Regarding "exploits" versus "experiences": it's mostly a branding thing. The word "experience" has been an abstract number in games (both tabletop and video games) for several decades now. It's the default understanding of "experience". It really needs a different name to avoid confusion, just like games that require you to spend points to attack call them "action points" or instead of "hit points".

Three Bones v1.1 fixes a typo, a minor layout item, and adds in a line about damage (under the Defend action) that got accidentally cut in editing.

"Three Bones plain.txt" is a plain text file of the game with a written description of the map for those who prefer to use a screen reader. 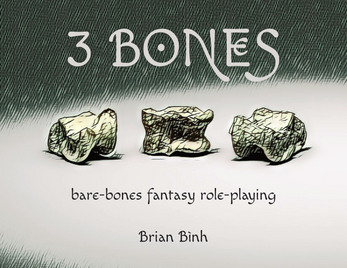 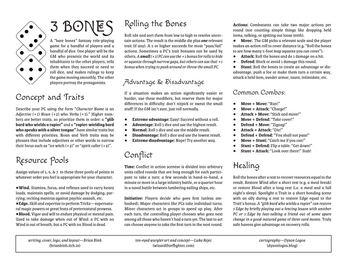 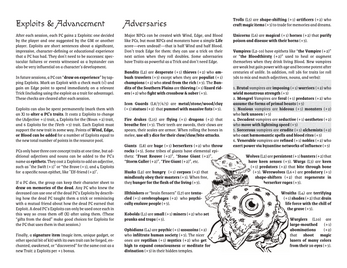